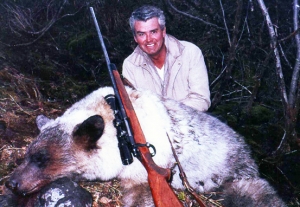 Gary Ingersoll was born on September 6, 1939 in the small town of Austin, Minnesota. Gary was quite literally “born to hunt” as his father was a professional trainer of champion bird dogs. Hunting was in his blood.

Gary’s first traveling big game hunt was for polar bear in Alaska. Not knowing what to expect on a guided big game hunt, Gary took up the challenge with great enthusiasm. His reward was a polar bear of more than ten feet. This was quite a lucky start!

Subsequently, Gary expanded his hunting adventures in North America and went on to take most of Alaska’s big game, as well as elk, mule deer, and pronghorn antelope. During one of his yearly Colorado elk hunts, another hunter in camp asked Gary if he had a Grand Slam of North American wild sheep. Gary did not know what this was and quickly learned that very few hunters at that time had attained this achievement.

Gary has always been a tirelessly “goal oriented” person. Gary takes his relentless work ethic with him to the mountains, woodlands, and jungle. In Gary’s mind, a challenge had been made. He had little trouble in securing a Dall’s, Rocky Mountain bighorn, and Stone’s sheep, but could not seem to get a break with the desert. His luck came in the form of a north Baja tag. His luck held true and the sheep that completed his Grand Slam turned out to be a B&C head.

His goals became loftier as Gary went on to become only the sixth hunter to obtain vaunted North American 27. In the process of accomplishing this feat, Gary was fortunate, or lucky, enough to harvest the last legal walrus and the number one Mexican jaguar.

About this time, Gary expanded his hunting horizons with a thirty-five day Kenya safari in the summer of 1976. During this trip, Gary was able to take 27 different species including lion, leopard, Cape buffalo, and the last legally hunted black rhinoceros.

Several more hunts came and went and at a hunting convention Dr. Jim Conklin approached Gary about his future hunting aspirations. For the first time in a long time, Gary had no goal. Dr. Conklin suggested he apply for the Weatherby Hunting and Conservation Award.

Although he liked the idea of this new challenge, Gary wanted to win this most coveted award on his own terms. He refused to “pad” his hunting resume with non-fair chase species. He discussed this issue several times with Dr. Conklin, who said that he agreed with Gary and had done the same during his own Weatherby run. A solid friendship was born from this mutual respect.

The highest peaks, darkest jungles, and densest forests became Gary’s backyard and he left few wild spots on earth untouched. He hunted the far corners of the world taking many magnificent trophies such as the Mongolian argalis, two subspecies of blue sheep, two Marco Polos, several ibex and chamois, and the number one and two Blanford urial. He was continually off to Africa in search of the toughest and most desirable game, including the bongo, mountain nyala, Nile lechewe, and forest elephant and put down many of his tracks in Europe and the South Pacific.

His wild sheep collection soon numbered more than twenty and he had several world records to his credit including at least one from every continent. Gary felt he was finally ready to apply. In 1991, in only his second year of application, Gary was bestowed the award he had worked so hard to obtain. And in 2001, Gary was presented SCI’s highest hunting honor, the International Hunting Award. Currently, Gary is still expanding his collection of native game, and to date has obtained virtually every fair chase inner circle and slam that SCI offers.

Throughout his life, Gary has been an ardent supporter of many hunting and conservation organizations. Through his volunteerism and financial support, Gary has an enviable record of giving back to the hunting community. A longtime supporter of FNAWS, GSCO, SCI, and RMEF, to name only a few, Gary has put back every bit as much as he has taken, and then some. He has financially and often times, solely, underwritten conservation projects in the United States, Asia, and Africa. His trophy room is a constant source of entertainment for grade school projects and every year he volunteers to be a guest guide for underprivileged and urban youth who are given the opportunity to take their first hunt in Texas at the DD ranch.

The Conklin Foundation is proud to present the 2003 Conklin Award to Mr. Gary Ingersoll.